Five awesome tools to perform behavioural analysis of a malware


Disclaimer
Analysis
A windows 7 virtual machine was setup with above mentioned tools. Ensured that a clean state of windows 7 with all tools was taken as a snapshot. The above mentioned tools were explained with various malware specimen. Find below hash values for malware used in this analysis and run all tools in background while executing malware

Process hacker
The malware was executed while process hacker was running in the background.

It was interesting to see the description for the malware. We could poke around the memory section of the malware later. 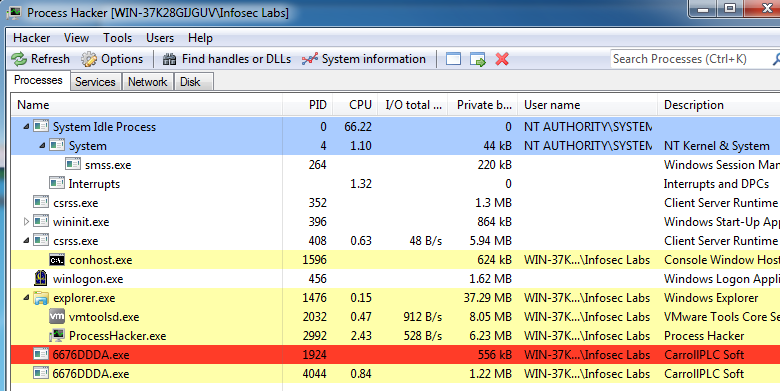 The initial process was terminated and new process was created with some strange executable and the location of file could also be found by looking at the properties of the process. It's always suggested to dump the memory of the infected system so that all the terminated processes can be identified and also made a timeline analysis of all processes. Looking at the properties of the newly created process 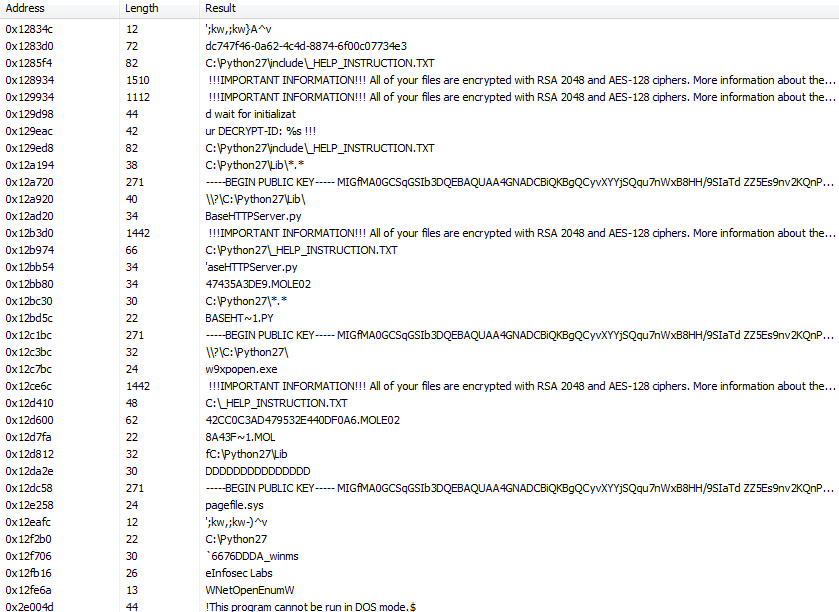 We could see many interesting strings in process memory related to ransomware and also a help instructions file for decryption process. We could also identify an IP address within process memory strings  and it's recommended to filter using regular expression for IP addresses

We can also dump entire process memory strings to a text file and search offline for IP addresses or anything of interest using filters.

Process Monitor
Upon running the process monitor in process create filter mode while the malware was executed. Using process monitor, we could identify all newly created processes and also all command line arguments for those processes

It was identified that the malware stops all critical services and delete all volume shadow copies on the system and then ran the dropped binary to encrypt all files. The location of newly created process was also identified as Users Appdata folder.

CaptureBat
CaptureBat was used to capture all dropped files and also the network traffic. Easy to use tool that could also capture all modified and newly created files on disk.

Below were the dropped files on disk

Further analysis (reverse engineering or dynamic analysis)of these files could bring better understanding of the malware. These file hashes could be used as IoC or signatures in malware detection

Dropped dll can be seen above screenshot

Adwind Indicators of compromise ( hash value of all dropped files)

Autoruns
Microsoft windows has many Auto Start Execution Points (ASEPs) through which the persistence can be achieved. This utility, which has the most comprehensive knowledge of auto-starting locations of any startup monitor, shows you what programs are configured to run during system bootup or login, and when you start various built-in Windows applications like Internet Explorer, Explorer and media players. These programs and drivers include ones in your startup folder, Run, RunOnce, and other Registry keys. Autoruns reports Explorer shell extensions, toolbars, browser helper objects, Winlogon notifications, auto-start services, and much more. Autoruns goes way beyond other autostart utilities.

As shown above, the malware made an entry into registry Run keys to maintain its persistence

This is just an explanatory post to explain how to use these tools for quick and effective behavioural analysis of a malware :)